Varieties in the spotlight

The varieties that transformed the world of chrysanthemums
All varieties of Dekker Chrysanten are special. But certain varieties are truly unique, as they have incredibly rare characteristics. So, which varieties do you simply have to meet?

Topspin: a powerful effect!
As a spray and disbud chrysanthemum, this variety is like a rising sports star with a very promising future. Topspin plays a blinder, whatever time of the year. Thanks to its powerful genetics, it looks fantastic in the vase for a very long time – without breaking a sweat. Topspin’s bright white colour is no match for the competition and could well earn it legendary status. One of its talents lies in its flowers, which can be painted exquisitely in one or two-tone colours. 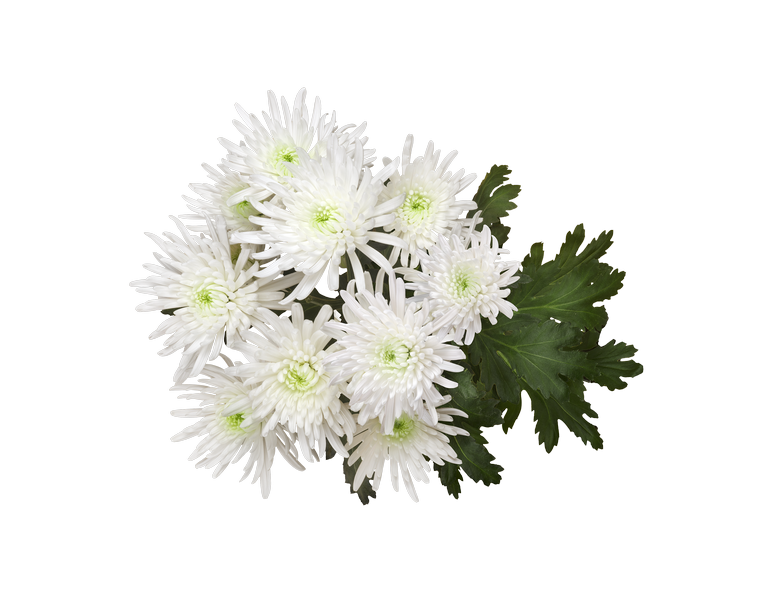 Let’s come Together!
Laurel & Hardy, Dolce & Gabbana, Jack & Jill, Bonnie & Clyde, Lennon & McCartney... the whole is sometimes more than the sum of its parts. These two different parts strengthen each other or compensate for one another in various ways: one possesses what the other lacks. This combination is what makes ‘Together’ unique, with two different colours – pink and white – joined in one single flower. The result shines brighter than the two colours on their own. Let's get Together! 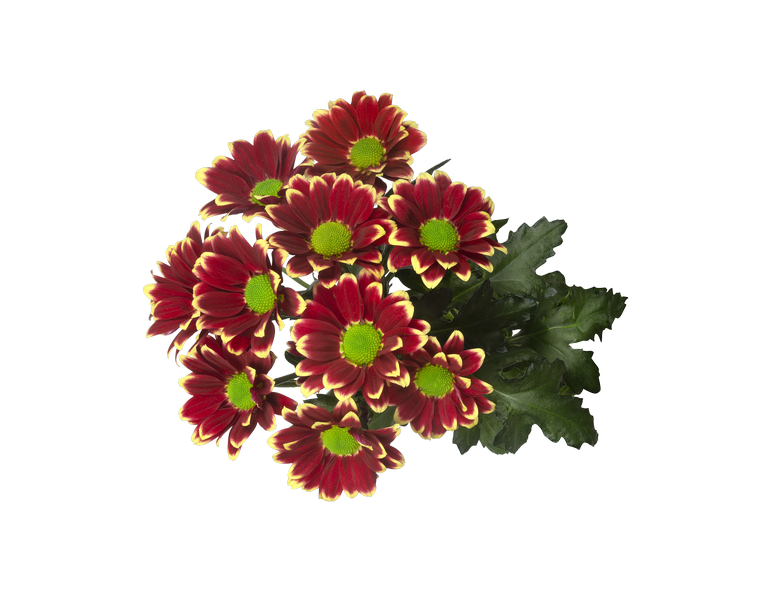 Memphis? That's All Right Mama!
It's not the largest city in America, but it is the one that can lay claim to inventing rock 'n' roll. That's right: we're talking about Memphis, Tennessee. Elvis Presley made his first recording at the local Sun Studio (706 Union Avenue) in 1953. And the rest is history, as they say.

Memphis was the birthplace of a new kind of music that shook the world – sometimes literally, with the volume turned up loud. And volume is also what distinguishes Memphis in the market, with its richly flowered stems. All Memphis colours contrast beautifully with the large, green heart, and the plant's shelf life is particularly good. What else could Elvis have said than 'That's All Right Mama'?

Altaj: one of a kind

‘One of a kind’ is a fitting description for the Altaj chrysanthemum. This flower’s name bears a rich history. The vast Siberian region of Altaj is characterized by imposing, snow-covered mountain peaks and icy blue lakes. It is easy to see why this snow-white chrysanthemum makes a suitable comparison. For decades, the region has been known as one of the largest sources for medicinal plants. The Altaj chrysanthemum does well in the Netherlands and can easily develop its elegant flowers which feature rounded flower strip. Thanks to its strong genes, this variety is well-suited for transport to all corners of Europe and Asia. 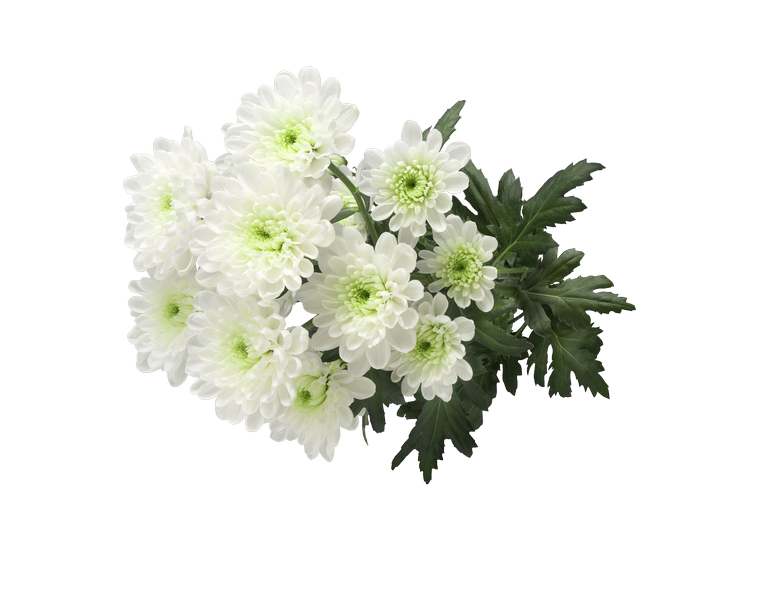 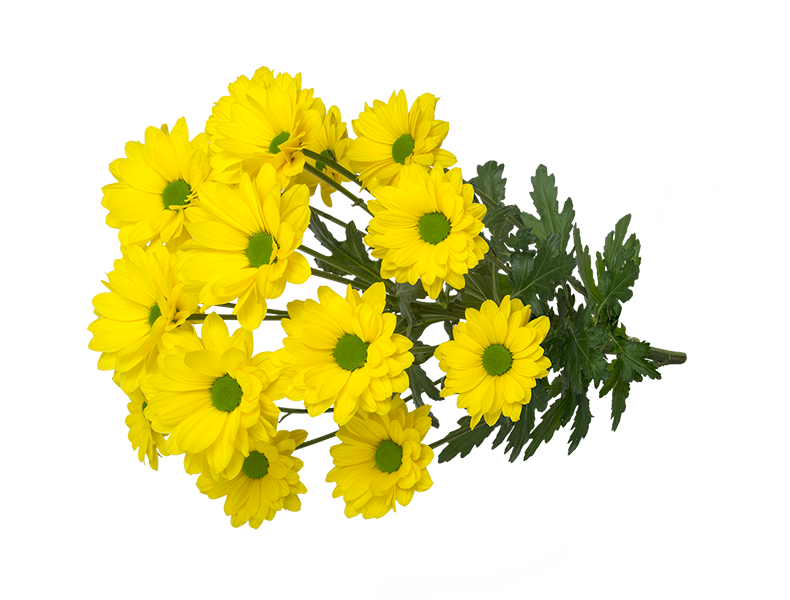 Yellow Strike: It is the ultimate high for a baseball pitcher: pitching the ball just right so the batter can't do a thing with it; he reacts too late or he wasn't standing right. Three strikes and he's out, heading back to the bench. Pitching at the highest level takes years of training, an experienced eye, and an infallible hand. Surely it's no coincidence that these are also the characteristics of a top chrysanthemum breeder, developing a variety that scores a home run? Just look at the variety Yellow Strike by Dekker Chrysanten. It is just such a variety that gets the crowd on its feet. What a perfect pitch!

AAA Zoom: it is hard to imagine a world without it

Everybody has heard of Zoom. This global platform enables us to keep in contact with our friends and family despite the current circumstances. This inspired us to name our new, pure white chrysanthemum in honour of this immensely popular communication tool. The similarities between the AAA Zoom and its namesake are therefore significant. Both have been making significant strides recently, both of them are a source of strength and quality in our lives, and both are accessible to everyone no matter where they are in the world. 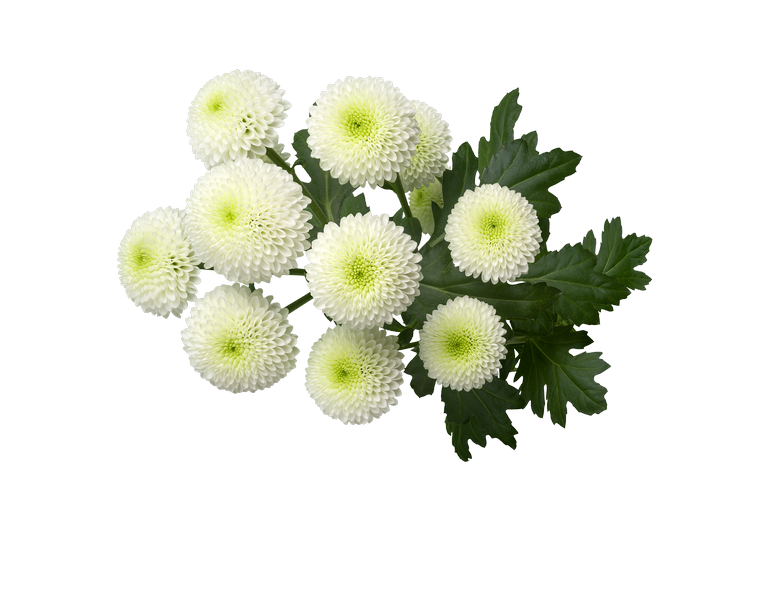 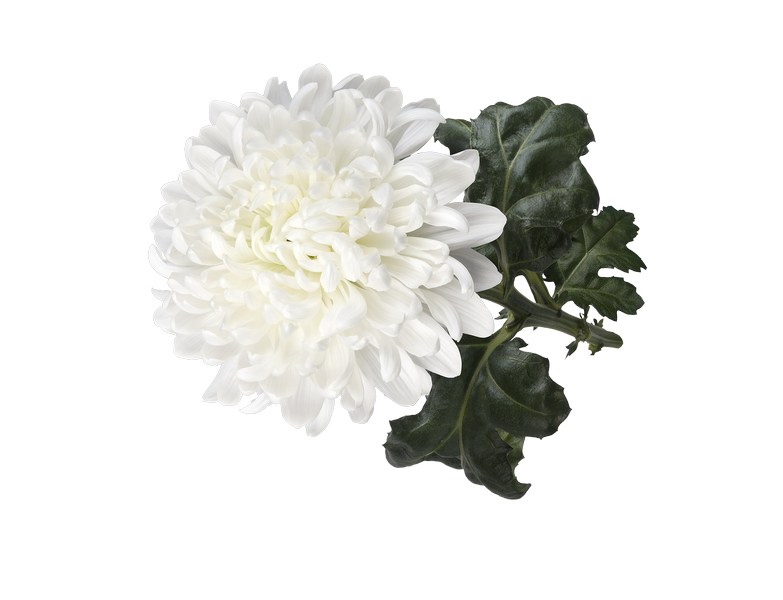 While the name Antonov does not have the same grandiosity as that of the American Boeing or McDonnell Douglas, builder of the DC aircraft, Russian aircraft manufacturer Antonov did develop the world's largest aeroplane, the Antonov An-225. Intended to be an aircraft for the transport of space shuttles, it was also suitable for other cargo. And just like this Antonov was famous for its sheer size, size is what sets this chrysanthemum variety, which bears the same name, apart.

The flowers of the white disbud chrysanthemum Antonov can grow up to 20 centimetres. This creates a monumental impression, which gives the Antonov an exclusive and luxury appeal that no American can equal. 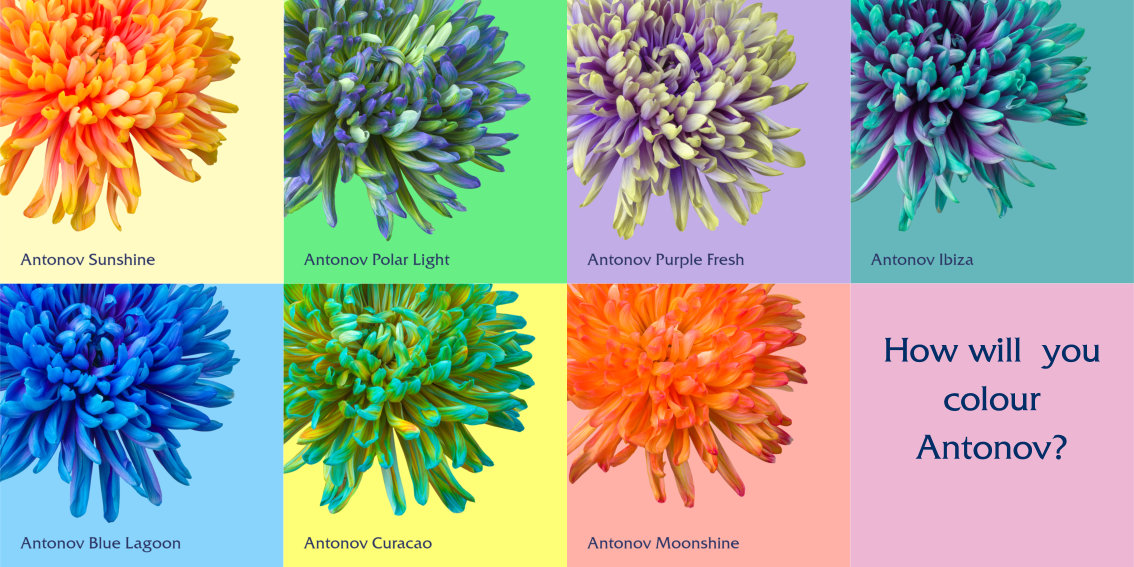 It was once a great family of nobles in Italy who flashed their wealth in the most flamboyant of ways. The Doria family are still a source of inspiration now, in the twenty-first century, as the name of a trendy Santini family. They are just as colourful as back then and a trendsetter, being the first pom-pom family in the Santini segment. The Doria family are still the show-offs they always were and lead a life of glamour – one only nobles can get away with. 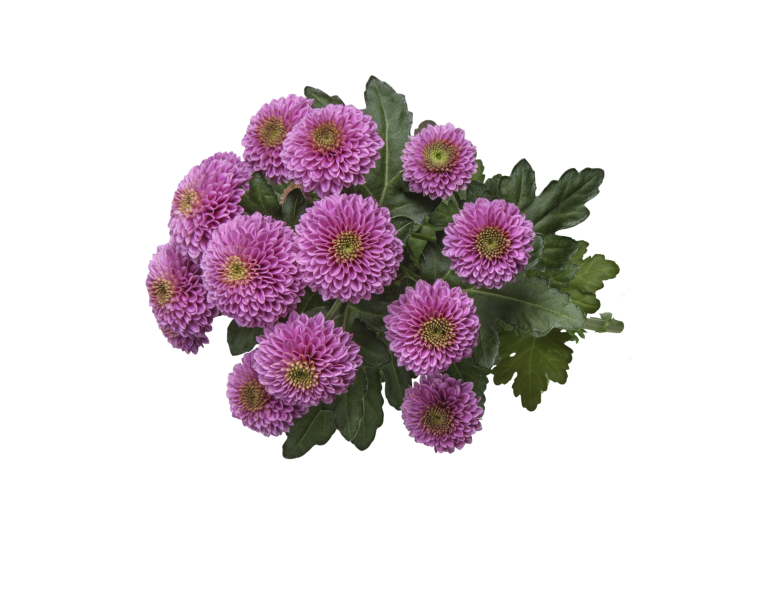 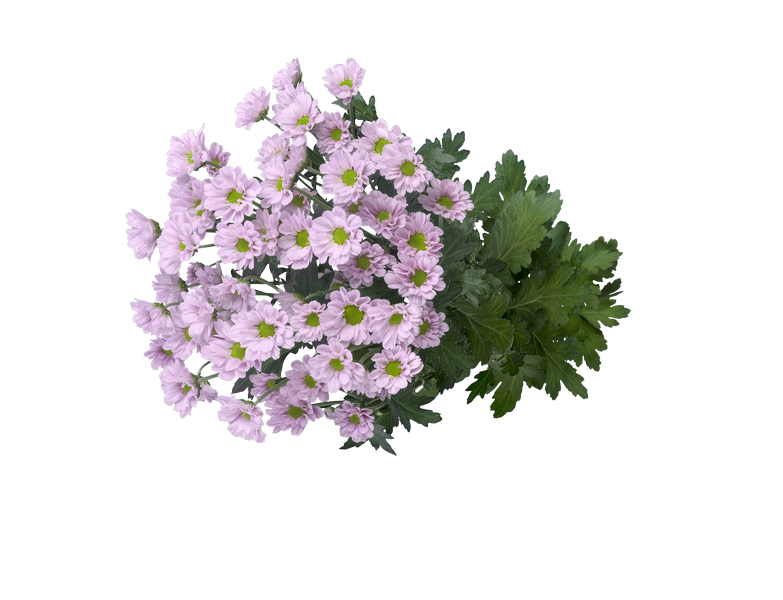 Madiba®, a variety with African roots

Africa stands for colour. For colourful robes, for cheerfulness and for exuberance. Exactly the characteristics that fit a chrysanthemum with an African name: Madiba, the nickname of Nelson Mandela. What made Mandela unique as a president, makes Madiba distinctive as a chrysanthemum family: a variety with a sympathetic face. The chrysanthemum family of the same name produces one descendant after the other. Each with 30 to 40 small flowers per chrysanthemum, which has given Madiba a new impulse to the market. The memory of Africa lives on in the names, which are named after places in Tanzania - not coincidentally the country where Dekker Chrysanthemums grows cuttings on a large scale! 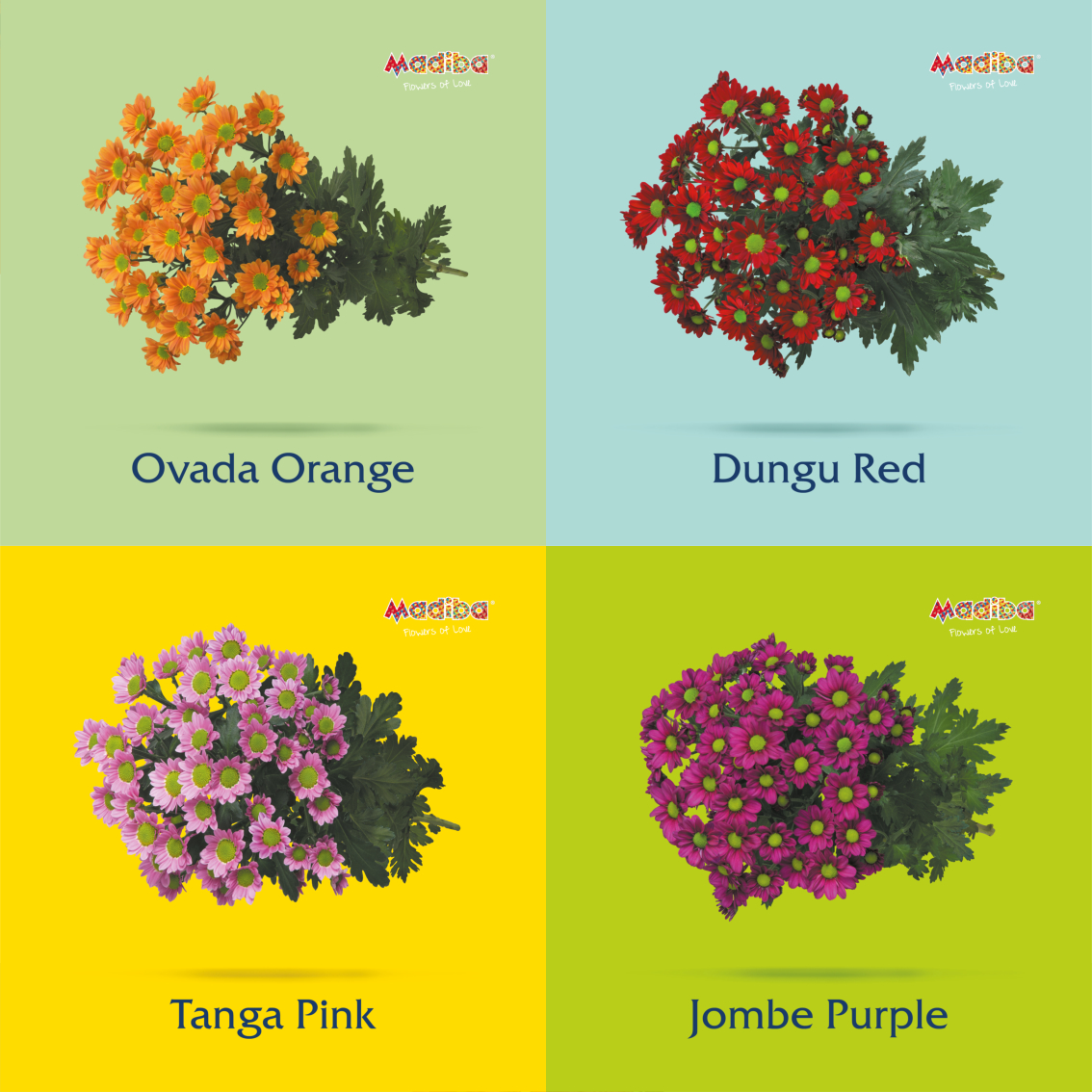 Are you looking for a different variety?

Then view our complete product range in all segments